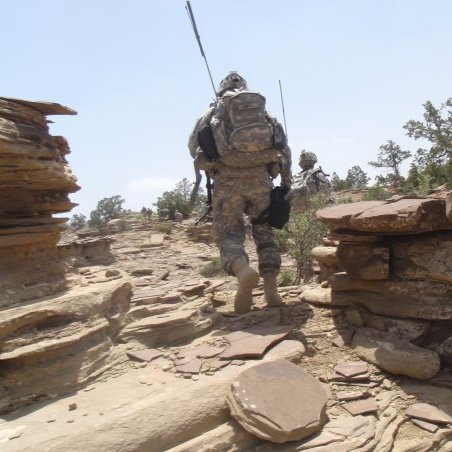 Ak-1-501ABN has not received any gifts yet

Saint Michael the Archangel,
defend us in battle.
Be our protection against the wickedness and snares of the devil.
May God rebuke him, we humbly pray;
and do Thou, O Prince of the Heavenly Host -
by the Divine Power of God -
cast into hell, satan and all the evil spirits,
who roam throughout the world seeking the ruin of souls.
Amen.

"Hold on, my friends, to the Constitution and to the Republic for which it stands. Miracles do not cluster and what has happened once in 6,000 years, may not happen again. Hold on to the Constitution, for if the American Constitution should fail, there will be anarchy throughout the world." - Daniel Webster, 1851

Infantrymen have a pride and arrogance that most Americans don’t understand and don’t like. Even soldiers who aren’t infantrymen don’t understand. The pride doesn’t exist because we have a job that’s physically impressive. It certainly doesn’t exist because it takes a higher level of intelligence to perform our duties. It’s sad and I hate to admit it, but any college student or high school grad can physically do what we do. It’s not THAT demanding and doesn’t take a physical anomaly. Nobody will ever be able to compare us to professional athletes or fitness models. And it doesn’t take a very high IQ to read off serial numbers, pack bags according to a packing list, or know that incoming bullets have the right of way.

The pride of the infantryman comes not from knowing that he’s doing a job that others can’t, but that he’s doing a job that others simply won’t. Many infantrymen haven’t seen a lot of combat. While that may sound ideal to the civilian or non-infantry soldier, it pains the grunt. We signed up to spit in the face of danger. To walk the line between life and death and live to do it again – or not. To come to terms with our own mortality and let others try to take our life instead of yours. We have raised our hands and said, “Take me, America. I am willing to kill for you. I am willing to sacrifice my limbs for you. I will come back to America scarred and disfigured for you. I will be the first to die for you.”

That’s why the infantryman carries himself with pride and arrogance. He’s aware that America has lost respect for him. To many he’s a bloodthirsty animal. To others he’s too uneducated and stupid to get a regular job or go to college. Only he knows the truth. While there are few in America who claim to have respect for him, the infantryman returns from war with less fanfare than a first down in a high school football game. Yes, people hang up their “Support Our Troops” ribbons and on occasion thank us for our service. But in their eyes the infantryman can detect pity and shame; not respect. Consider this: How excited would you be to meet the average infantryman? Now compare that with how excited you’d be to meet a famous actor or professional sports player and you will find that you, too, are guilty of placing the wrong people on a pedestal. You wouldn’t be able to tell me how many soldiers died in the war last month, but you’d damn sure be able to tell me if one of the actors from Twilight died.

Yet the infantryman doesn’t complain about that. He continues to do his job; to volunteer his life for you, all while being paid less in four years than Tom Brady makes in one game.

It’s a job most Americans don’t understand, don’t envy, and don’t respect. That is why we have pride for the infantry.

You need to be a member of Washington State Militia to add comments!